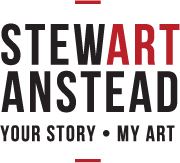 This ’32 Ford has raced at Bonneville for vintage classics, and has topped out at 178 mph.

I have placed the yellow ’32 Mooneyes Coupe here in a “recreated moment” at the Bonneville Speedway in the early 1960s that might have been, including Dean Moon in his cowboy hat inspecting the racer.

Dean Moon is an early hot rodder and innovator. He is one of the original founders of SEMA.

Among his creations is the famous Moon Disc aluminum wheel covers (shown in the painting) that claimed to reduce enough drag at over 190 mph that it added an extra 7 mph in performance.

He is the creator of highly sought-after hot rod parts and modifications. The very first A.C. Shelby Cobra to reach the United States, delivered to Carroll Shelby, was fitted with a Ford V8 engine and transmission at Dean Moon’s shop in Santa Fe Springs, in February 1962.

Another innovation by Moon that most people will recognize is the famous barefoot gas pedal.

Custom Request or Question about this item